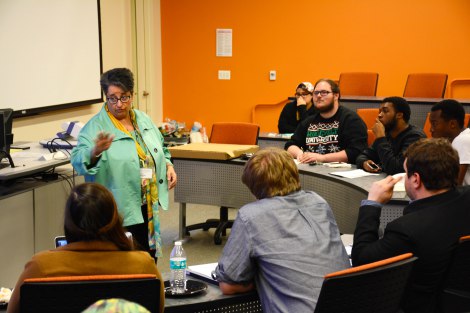 With Roosevelt University facing severe financial stress, the current administration held several meetings with Roosevelt’s Student Government Association. Incoming Provost Lois Becker and President Ali Malekzadeh answered questions from students on Nov. 2 and Nov. 9, respectively, in order to ease the concern of students, accept comments and suggestions and inform students about some of the potential policies being considered.

Students questioned Provost Becker and President Ali about changes in Roosevelt policies, such as its commitment to social justice, tuition increase, and the sale or lease of large assets like the Gage building and University Center.

“We’re going to be here for another 70 to 100 years,” President Malekzadeh said, assuring students. “There will be up and downs. We had enrollment challenges last year, mainly because of MAP, so fewer students showed up. We have to cut our costs.”

President Malekzadeh then explained why Roosevelt is in the financial position that it is currently.

“When they built this building they didn’t do any fundraising for it,” said President Malekzadeh. “Therefore debt on this building is very high, that puts pressure on our budget. You saw tuition go up, like, three percent on average. That was the reason for it. What I’m trying to do is cut our costs as much as possible without hurting your education in the classroom.”

President Malekzadeh explained that to low student enrollment had left Roosevelt with an abundance of space, allowing for a consolidation of university resources. In order to stem the possible tide.

“What we’re trying to do is use the facilities that we have as much as possible. Gage costs us significant millions of dollars every year to operate. We’re not using it as much as we should, or we have extra capacity in this building. We should be using that.”

Students also questioned Provost Becker and President Malekzadeh about initiatives to not only retain current students, but also attract new students as well. Other concerns addressed at the meeting ranged widely from plans for Schaumberg, mentoring programs, repairs to the Auditorium building, attracting new students and transfer students, as well as the types of marketing being done to attract students and businesses to invest in the university.

“There is a Faculty Leadership Team that is currently identifying the learning outcomes for a new general education program,” Provost Becker stated in an email to the Torch about some of the initiatives being undertaken by fine-tune programs. “I want to support the reforming of general education and make sure that the Roosevelt undergraduate education prepares students for careers and graduate school. Roosevelt has a strong tradition of experiential education. I want to expand that work and make sure that students can use these opportunities to best take advantage of the job market and continuing education.”

In a statement to the Torch, SGA President Nathan Stoll stated that he was glad to see the both the Provost and the President listen to the concerns of the students, and that the SGA was working toward hearing more student concerns.

“We have these meetings with people like Provost Becker and President Ali in an effort to provide an outlet for students to speak directly with the people who make the policies of our university,” said Stoll. “We’re looking now to start bringing in some of the Vice Presidents in for open floor forums where students can share their experience, ideas, and grievances with the people charged to serve our students and our school…we’re hoping more students come to our open meetings every Wednesday to speak up about the problems they face.”